Thugs of Hindostan– Yash Raj Films signs Amitabh Bachchan and Aamir Khan for the first time ever in their next film, Thugs of HIndostan. The actress hasn’t been finalized yet. The writer-director of the film is Vijay Krishna Acharya, also known as Victor, teams up with YRF Films for the second time after Dhoom3. Confirming our sources, Aamir Khan tweeted, “Finally, the moment I’ve been waiting for has come… to work with my icon, Mr. Bachchan! Thanks Adi, Victor, for ‘Thugs of Hindostan’.Shoot starts early next year, and the release has been locked for Diwali 2018. Can’t wait to get started! Fingers crossed.” 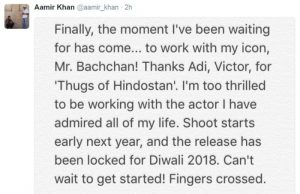