Miss India Worldwide 2018 Shree Saini, an Indian American college student, and Dharmatma Saran, chairman and founder of the Miss/Mrs. India Worldwide contest, were honored at the second annual Global Beauty Awards that were held at the Snoqualmie Casino in Seattle, Wash.

While Saini was awarded the Best Titleholder award, Saran was presented the Director/Producer award at the ceremony where Miss USA 2018 Sarah Rose Summers was the emcee.

The citation for Saini, who was picked out of 15 nominees, read: As Miss India Worldwide, Shree Saini has spoken at hundreds of events in over 70 cities, 11 states and 5 countries, all while being a full-time college student. She has collaborated with governor, the secretary of state, college presidents, mayors, and dozens of nonprofits, and her work has been published in over 500 newspapers.<iframe width=’300′ height=’250′ frameborder=’0′ scrolling=’no’ src=’https://widget.cuelinks.com/widgets/38547?pub_id=40199CL36284′></iframe>

Saini, in her acceptance speech, thanked her parents and Saran for their continued support. The citation for Saran, who is a pioneer in starting Indian beauty pageants in the U.S., read: He provides exceptional opportunities to his winners, many of whom have gone to become Bollywood celebrities and the whos who of the Indian community worldwide. 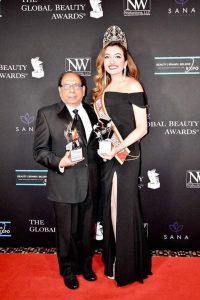 Saran thanked Maureen Francisco and David Van Maren, producers of the Global Beauty Awards, for this honor. He also thanked Ekta Saini for nominating him and his wife, Neelam Saran, who has been a source of strength in his 38-year pageant journey.

Saran was chosen for this award out of 15 other influential nominees from around the world, a press release said. In addition to the above awards, Sonia Keshwani won the Best Talent award.

Indian beauties have performed extremely well both at the national and international pageants. Super Models Priyanka Chopra and Aishwarya Rai won the titles of Miss World whereas, Lara Dutta and Sushmita Sen brought home the titles of Miss Universe. Good luck to the beauties.