Flautist Paras Nath during this Covid ,spreads love through music ,It is never too late to start learning and make beautiful music with flute Flautist

The concepts covered in the online classes include:
* Breathing and flute positioning technique,
* How to make a sound,
* Learning notes,
* Basic music theory
* Playing some simple melodies. 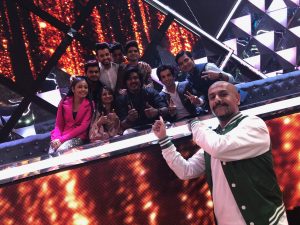 Now we are all quarantined with a lot of free time in our hand, it can either be productive or destructive. I suggest be productive and utilise your time learning something new adds Nath.

MUSIC IS THE ONLY STAR – ANKIT TIWARI

Actress Kriti Sanon says that her Dilwale co-star Shah Rukh Khan is a spendthrift as a producer who doesnt care how much money is going into a film in order to make it worthwhile.
Sir is so cool as a producer that you cant even imagine. I think he wants to spend more and more. He doesnt care about how much money is going in as long as the film, which is coming out, is good, Kriti said at an event. Shah Rukh has co-produced Dilwale with Rohit Shetty.
He always says, When so many people come and spend their money and time to watch a film, they deserve the best. Thats how he is, she added.
As seen in the films trailer, the car stunts, action scenes and lavish locales exhibit that there hasnt been any restraint in budgeting.
In Dilwale, Kriti is paired opposite Varun Dhawan, who plays the role of Veer, Shah Rukhs younger brother.
Kriti is certainly impressed by Shah Rukhs acting methods and says she learnt a lot from him.
With Shah Rukh sir, I remember when we were doing scenes, he rehearses a lot. He rehearses his marks and lines with you. So by the time you come for your take, you wouldnt really feel that youre really doing the scene as it comes very naturally, she said.
After impressing viewers opposite Tiger Shroff and director Sabbir Khan in Heropanti, Kriti is happy to be part of a big-budget entertainer with experienced artists.